3/18/2013: Another complete set has surface and has been added to the list below. I now know of six complete sets.

Earlier this week I purchased a Cal Ripken, Jr. 1992 Donruss Super DK card for $1,250 off eBay. The Super DK is exactly the same card as the regular issue Diamond King, but it is much larger. The seller sent me some information on how he acquired the card which supports the details in the price guides about these cards being produced for use as salesperson samples:

"The set came from a guy who's mother was a sales rep at Donruss.  She went to the strategy meeting where they handed these out.  They never ended up going through with the proposal they had at that meeting, and the only cards that remained were the ones handed out to the sales reps.  He kept them in their original outer packaging for 20 years prior to selling it on ebay about a month ago.  The person that I bought the set from acquired them from this person.  Unfortunately the guy I bought from did not ask a question like:  "How many sales reps were there at that meeting".  If it were like any big company I would imagine that there were probably the heads of each region there, as well as maybe their assistants.  One person I know that is a big Frank Thomas collector thinks that there were less than 10 given out, which I could see.  I think that far less were kept, as if 10 were handed out, then that means there is a total of 270 cards out there (27 cards per set).  I have seen 1 listing prior to mine of a David Justice card during the past 4 years on ebay.  I'm thinking that there may be less than 5 or 6 still out there, and even less of the common guys in the set." 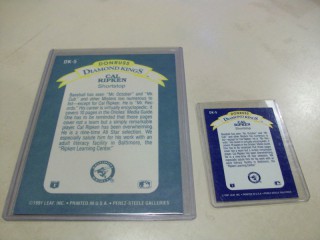 These cards are certainly some of the most rare cards from the 1990s. Typically they are found with white spots on the front where the salesperson's folder has become stuck to the front of the card. Given this fact, it is nearly impossible to find them in mint condition. The price guides are so completely off the mark on the values it's ridiculous. They are so rare they really can't be priced accurately. The Beckett information I have lists the Cal Ripken, Jr. card for $150. I would buy all I could find at that price!

This particular card comes from an original sealed set handed out at the company meeting described above. A special thanks to the seller for taking the pictures below specifically for my blog:

UPDATE (2/7/2012 11:49 PM CST): I was searching completed eBay auctions and found three 1992 Donruss Super DK sets sold for a grand total of $560 due to poor titles (Oversize versus Super DK), lack of decent starting prices or reserves, lack of rarity/origin information, and for being confused with the smaller, common versions of the cards. The third auction listed below is incredibly crazy since it simply lists the cards as "Over Sized Jumbo Lot" in the title. Since the third auction occurred later, people were probably watching the original owner for more sets at that point.

Don't be fooled by these auction results though. These cards are worth significantly more than any of these auctions would indicate, perhaps in the thousands. Sadly, these auctions are probably what Beckett would notice since my transaction was not public, only adding to the vast undervaluing of these cards in the price guide.

A sealed set was also sold to the person I bought my Ripken from, however, he wasn't the high bidder in any of the sealed set auctions since his feedback number doesn't match the winning bidder's feedback number. I'm guessing he purchased it from one of the people who won the original auctions. In addition to the Ripken he sold me, he also sold another Ripken for $1,250 in a private transaction. Where did that one come from?

It made me a little sick to my stomach to see I could have bid on the entire set, not once, but three times, for a mere fraction of what I paid for one card from the set.

I seriously hope that is all I find out about because this is getting a little ridiculous. Although rare, given these new findings, perhaps these cards may not be as rare as originally thought and another small hoard awaits us.

UPDATE (2/8/2012 10:07 AM CST): The seller I purchased my Ripken from contacted me this morning and shed some light on where he got his first Ripken as well as the series of events surrounding the sale of these sets:

"Here is the sequence of events from the original seller of those two and a half sets:
$30/each for two sets -------> One of the original buyers flips it for a BIN of $500 that lasted less than 3 minutes on ebay to a big time baseball card buyer on ebay, the other buyer contacts me thanks to my original Ripken listing and I make him a blind offer of $2k for the set and he accepts.  I actually offered him $1k for the Thomas or $2k for the set and he took the money for the set.
The original seller was contacted by the person that bought the BIN for $500 and agrees to list the remaining cards he has from a third set for $500 as a BIN.
My first Ripken came from a card shop in MN called Southpaw Cards.  He bought the set from a dealer back in the early 90's and sold off the cards individually over the next 15+ years, with the Ripken being the last one.
I bought that Ripken prior to this whole sequence of events just hoping someone had the Frank Thomas from the same set to trade for it."

I have created a table listing the sales of these cards I am aware of:

I now know of a total of five six Ripken cards:

I think there are likely more than 10 of each card available. Especially given the fact that one person who worked for Donruss had three of them!