I recently found the freedomcardboard.com message boards and found a very interesting thread on a little-known card issued with the 1993 U.S. Playing Card Aces decks. The U.S. Playing Card Co. did a promotion where they issued four autographed cards in the decks: Greg Maddux, Fred McGriff, Terry Pendleton, and Cal Ripken, Jr. Shown below is a store display where apparently 1 autographed card was issued per display:

In the price guides, only the McGriff, Pendleton, and Ripken are mentioned. The Maddux card is left out, although it does exist.

What makes the Ripken autograph card interesting is both its rarity and the fact it can't easily be authenticated, that is, until now. I have two different Ripken autograph images shown below. Can you pick out the card that didn't come autographed out of the original deck?

If you chose "Card #2", you are right! Card #1 was signed after-market and card #2 was signed before being included in the U.S. Playing Card deck.

Here are the tell-tale signs of a real, deck-issued autographed card: 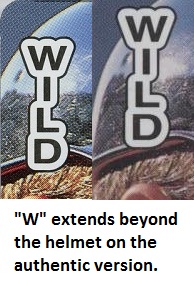 The following images show several examples of this card. Based on the signs listed above, can you pick out the fakes? The answer is at the bottom of the post.